Annette(Vista 3320)-"Annette On Campus"-LP. This vintage Annette Lp was released in 1963 and features a gatefold cover with photos of Annette. Tracks include many college alma maters. Annette is featured in color on the front and back covers.The most popular of the Mouseketeers on the '50s TV program The Mickey Mouse Club, Annette Funicello was herded into the studio at the age of 16 to become the first female teen idol rock & roll star. Billed simply as Annette on most of her records, she hit the Top 20 five times in 1959 and 1960, and continued to record constantly in the early '60s as she moved into film stardom in a variety of California beach-culture vehicles. With her thin voice double-tracked and reverbed to achieve the necessary volume, the material was largely saccharine pop clap-trap flavored with elements of rock & roll. Kitschy overtones of Italian and Hawaiian popular music also figured strongly, and she even took stabs at surf and ska. She retired from recording in the mid-'60s to raise her family. The LP has been autographed inside the gatefold cover by Annette Funicello in blue fountain pen...........................CONDITION OF VINYL IS TERRIBLE.CONDITION OF COVER AND AUTOGRAPH IS VG....... 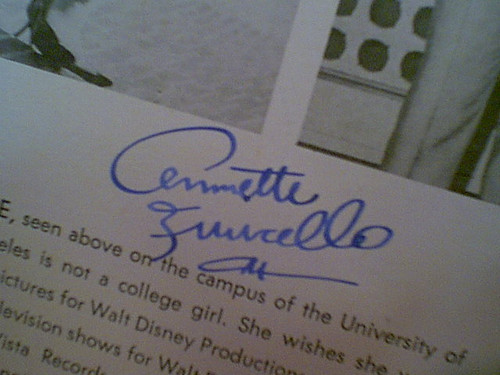