This item is an 8" X 10",black and white photo of actor Dana Andrews in a scene from the 1962 Alcoa Television Movie-"The Boy Who Wasn't Wanted". The photo has an original typed and dated byline which explains the photo. The back of the photo has a date-September 4,1962-and original newspaper editor's markings.A former accountant for the Gulf Oil Company, Dana Andrews made his stage debut with the prestigious Pasadena Playhouse in 1935. Signed to a joint film contract by Sam Goldwyn and 20th Century Fox in 1940, Andrews bided his time in supporting roles until the wartime shortage of leading men promoted him to stardom. His matter-of-fact, dead pan acting style was perfectly suited to such roles as the innocent lynching victim in The Ox-Bow Incident (1943) and laconic city detective Mark McPherson in Laura (1944). For reasons unknown, Andrews often found himself cast as aviators: he was the downed bomber pilot in The Purple Heart (1944), the ex-flyboy who has trouble adjusting to civilian life in The Best Years of Our Lives (1946), and the foredoomed airliner skipper in Zero Hour (1957), The Crowded Sky (1960), and Airport 1975 (1974). His limited acting range proved a drawback in the 1950s, and by the next decade he was largely confined to character roles, albeit good ones. From 1963 to 1965, Andrews was president of the Screen Actors Guild, where among other things he bemoaned Hollywood's obsession with nudity and sordidness (little suspecting that the worst was yet to come!). An ongoing drinking problem seriously curtailed his capability to perform, and on a couple of occasions nearly cost him his life on the highway; in 1972, he went public with his alcoholism in a series of well-distributed public service announcements, designed to encourage other chronic drinkers to seek professional help. In addition to his film work, Andrews also starred or co-starred in several TV series (Bright Promise, American Girls, and Falcon Crest) and essayed such TV-movie roles as General George C. Marshall in Ike (1979). Dana Andrews made his final screen appearance in Peter Bogdanovich's Saint Jack. The photo has been autographed on the front by Dana Andrews with a fountain pen in brown...................................CONDITION OF PHOTO,BYLINE AND AUTOGRAPH IS VERY GOOD.................................... 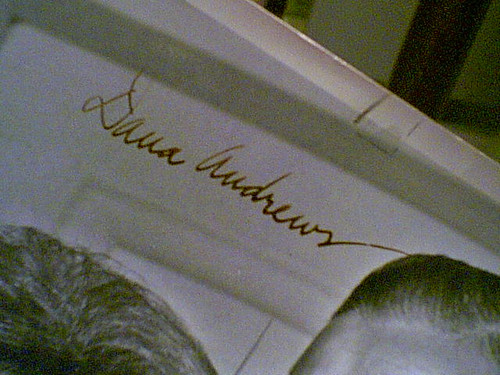