"Three Little Words"-1930-Harms-sheet music. This song is featured in the 1930 RKO Radio Movie-"Check And Double Check". The movie stars Amos N Andy and they are featured on the front cover of the sheet music.Originally released as Check and Double Check, Amos 'N' Andy brought radio's highest-rated program to the big screen. Amos 'N' Andy were two black characters played by two white men, Freeman Gosden and Charles Correll. Donning blackface, Gosden and Correll are seen as well as heard as A&A, partners in the Harlem-based Fresh Air Taxicab Company. Our heroes spend most of their time helping the white romantic leads (Sue Carol and Charles Morton) try to locate a missing deed to some property owned by Morton's family. Eventually, Amos 'N' Andy unwittingly end up in a haunted house. Virtually the only genuine African Americans in the film are the members of Duke Ellington's Cotton Club orchestra, whose appearance at a high society ball is the device that brings A&A into the plot. Though no other Amos 'N' Andy films would follow, a popular TV series later aired in the 1950s with black actors cast in the leads. The sheet music has been autographed ont he front cover by "Amos (F.Gosden)" and "Andy (CJ Correll)"...................BOTH SHEET MUSIC AND AUTOGRAPHS ARE IN USED CONDITION................ 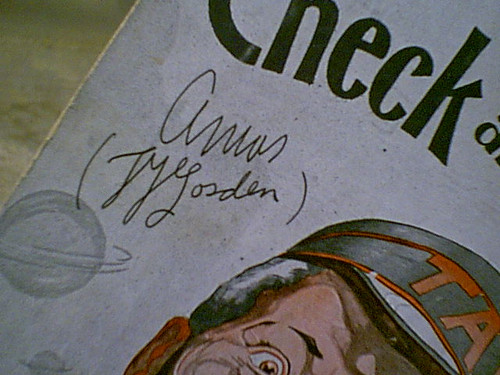