Original Cast-"Goldilocks"(Columbia Masterworks OS 2007)-LP. This vintage original cast LP was released in 1958 and books for $60.00 in Mint condition. The LP features the musical production of "Goldilocks" starring Don Ameche and Elaine Stritch.Goldilocks is a musical with a book by Jean and Walter Kerr, music by Leroy Anderson, and lyrics by the Kerrs and Joan Ford. A parody of the silent film era when directors made quickie one-reelers overnight, it focuses on Maggie Harris, a musical comedy star retiring from show business in order to marry into high society, until producer-director Max Grady arrives to remind her she has a contract to star in his film Frontier Woman. The two battle and slapstick situations ensue as the movie evolves into an epic about Ancient Egypt and filming extends well beyond the amount of time Grady promised it would take to make the movie. Following tryouts in Boston and Philadelphia, the Broadway production, directed by Walter Kerr and choreographed by Agnes de Mille, opened on October 11, 1958 at the Lunt-Fontanne Theatre, where it ran for 161 performances, closing on February 28, 1959. The cast included Elaine Stritch, Don Ameche, Russell Nype, Margaret Hamilton, Pat Stanley, and Patricia Birch.The LP has been autographed on the front cover by Don Ameche and Elaine Stritch........... CONDITION OF VINYL,COVER AND AUTOGRAPHS IS VG.......... 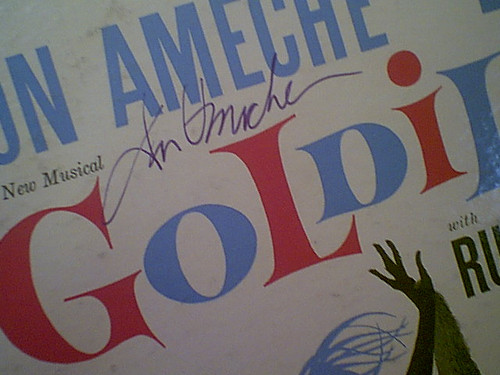