Music From The Woody Allen Film-"Manhattan"(Columbia Master Works 36020)-LP.Manhattan is a 1979 American romantic comedy-drama film directed by Woody Allen from his screenplay co-written with Marshall Brickman and produced by Charles H. Joffe. Allen co-stars as a twice-divorced 42-year-old comedy writer dating a 17-year-old girl (Mariel Hemingway) before eventually falling in love with his best friend's (Michael Murphy) mistress (Diane Keaton). Meryl Streep and Anne Byrne also star in the film.Manhattan was filmed in black-and-white and 2.35:1 widescreen. The decision to shoot in black and white was to give New York City a "great look". The film also features music composed by George Gershwin, including his arguably most famous piece, Rhapsody in Blue, which inspired the idea behind the film. Allen described the film as a combination of his previous two films, Annie Hall and Interiors. The film was met with widespread critical acclaim and was nominated for two Academy Awards: Best Supporting Actress for Hemingway and Best Writing, Screenplay Written Directly for the Screen for Allen and Brickman. Its North American box office receipts of $39.9 million made it Allen's second biggest box office hit (after adjusting for inflation). Often considered Allen's best film,it ranks 46th on AFI's 100 Years...100 Laughs list and number 63 on Bravo's "100 Funniest Movies." In 2001, the United States Library of Congress deemed the film "culturally significant" and selected it for preservation in the National Film Registry.The LP has been autographed on the front cover by Woody Allen...........CONDITION OF VINYL,COVER AND AUTOGRAPH IS VG. 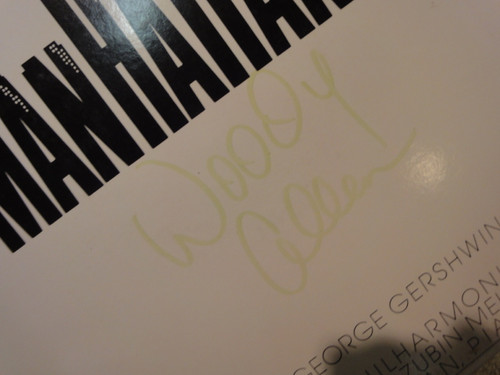