Modern Drummer Magazine-June 1988-126 pages. This vintage magazine features a color cover photo of Tommy Aldridge plus and article with photos.One of the most in-demand (and well-respected) hard rock drummers remains journeyman Tommy Aldridge. Born August 15, 1950, in Jackson, MS, Aldridge was entirely self-taught, inspired by such groundbreaking '60s rock outfits as Cream, the Beatles, and Jimi Hendrix. By the early '70s, Aldridge had joined up with up-and-coming Southern rockers Black Oak Arkansas, playing on a total of nine albums from 1972 through 1976 and touring the U.S. nonstop. It was also around this time that Aldridge developed the double-bass drumming technique that would soon be copied by countless other drummers (especially those in thrash metal bands come the 1980s). From there, Aldridge signed on with Canadian blues-rock guitarist Pat Travers, appearing on five albums from 1978 through 1981, before accepting a slot in Ozzy Osbourne's band. The group included legendary guitarist Randy Rhoads, and is often pointed to as one of the finest metal lineup's ever, which, unfortunately, released only a single studio album, 1981's Diary of a Madman, before Rhoads' tragic death in March of 1982 (a live album from the 1981/1982 tour, titled Tribute, would be issued posthumously in 1987). The magazine has been autographed on the front cover by Tommy Aldridge............BOTH MAGAZINE AND AUTOGRAPH ARE IN VERY GOOD CONDITION............................ 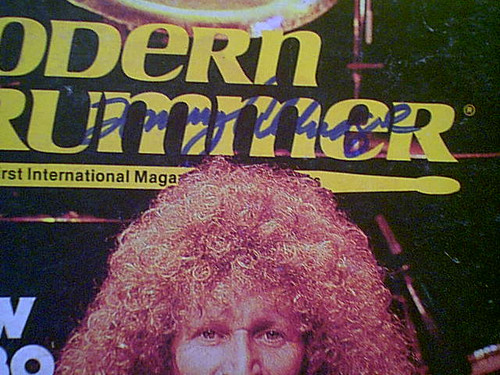