Saul Alinsky-"Reveille For Radicals"-1969-Vintage Books-4" X 7"-234 pages-Softcover Book-Signed By Author.Tough, pragmatic and a lover of humanity, Saul Alinsky pioneered a method of helping poor and working-class people organize themselves to improve their communities. Combining urban social theories he had learned at the University of Chicago with street smarts he had earned growing up in that city's Jewish ghetto, Alinsky first worked in prisons and as a juvenile delinquency researcher. Then, starting in crime-ridden Chicago neighborhoods in the late 1930s, he helped unions, churches and other social groups unite and win everything from jobs to streetlights and garbage collection. He would immerse himself in the neighborhood, listen to ordinary people's troubles and needs, assess where power lay, and empower previously divided groups to seek common goals by standing up to government and corporate machines. With financial backing from department-store heir Marshall Field III, he established the Industrial Areas Foundation, which helped him extend his work to several U.S. cities. He had little patience for militants, Communists or dreamy liberals, saying he was a community organizer because he believed in American democracy and because "I can't stand to see people pushed around." The book has been autographed on the title page by Saul Alinsky................BOTH BOOK AND AUTOGRAPH ARE IN VERY GOOD CONDITION. 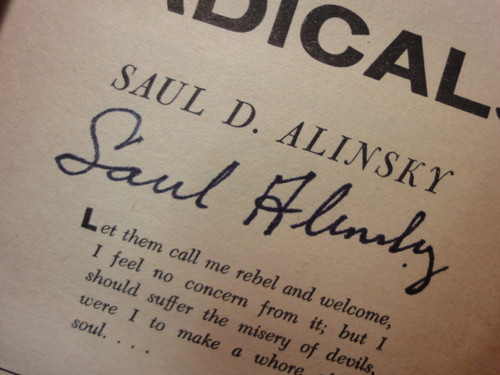