THIS IS AN AUTHENTICALLY AUTOGRAPHED PLAYBILL BY ROBERT ALDA AND STEVE LAWRENCE.. PLAYBILL-WHAT MAKES SAMMY RUN?-1965-PHOTO COVER IS SIGNED BY ROBERT ALDA AND STEVE LAWRENCE. CONDITION OF THE PLAYBILL AND AUTOGRAPH IS VERY GOOD. What Makes Sammy Run? (1941) is a novel by Budd Schulberg. It is a rags to riches story chronicling the rise and fall of Sammy Glick, a Jewish boy born in New York's Lower East Side who very early in his life makes up his mind to escape the ghetto and climb the ladder of success. It was later made into a long-running Broadway musical. 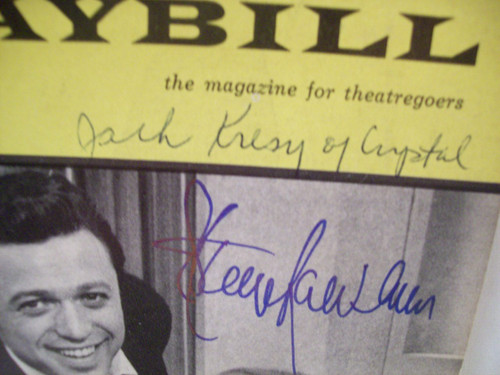