"Walt Disney Presents The Story Of An Incredible Journey"(Disneyland 1927)-Narrated By Rex Allen.The Incredible Journey is a 1963 live-action Walt Disney film based on the novel, The Incredible Journey, by Sheila Burnford. Narrated by Rex Allen, the film follows the adventure of three pets, Luath the Labrador Retriever, Bodger the Bull Terrier, and Tao the Siamese cat, as they journey 250 miles through the Canadian wilderness to return to their home.....Rex Elvie Allen (December 31, 1920  December 17, 1999) was an American film actor, singer and songwriter, known as the Arizona Cowboy, particularly known as the narrator in many Disney nature and Western film productions. For contributions to the recording industry, Allen was honored with a star on the Hollywood Walk of Fame.The LP has been autographed on the front cover by Rex Allen With a fountain pen in black.........CONDITION OF VINYL,COVER AND AUTOGRAPH IS WEAK VG. 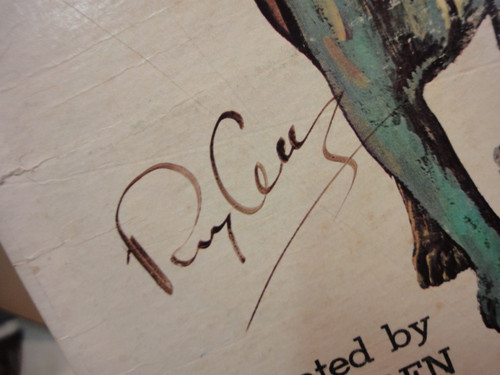