THIS IS AN AUTHENTICALLY AUTOGRAPHED LP BY MEL ALLEN.. MEL ALLEN'S BASEBALL GAME-MELL CALLS THE PLAYS, YOU PLAY THE GAME(RCA LBY 1025)DOES NOT HAVE PLAYING PIECES. COVER IS SIGNED BY MEL ALLEN. CONDITION OF THE VINYL,COVER, AND AUTOGRAPH IS VERY GOOD. Mel Allen (February 14, 1913  June 16, 1996) was an American sportscaster, best known for his long tenure as the primary play-by-play announcer for the New York Yankees. During the peak of his career in the 1940s, 1950s and 1960s, Allen was arguably the most prominent member of his profession, his voice familiar to millions. In his later years, he gained a second professional life as the first host of This Week in Baseball. 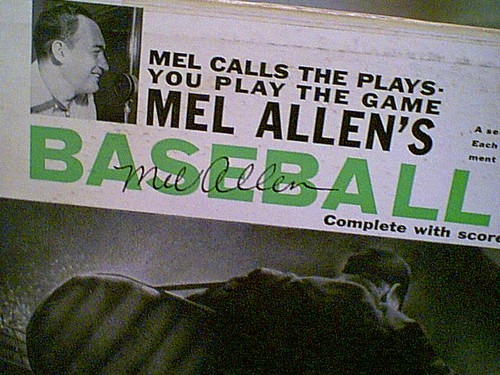