This item is a 12" X 12",color lithograph photo of Madeleine Albright.Madeleine Albright was the first woman ever to hold the post of U.S. Secretary of State. Her father was Josef Körbel, a member of the Czech diplomatic corps; the family escaped the Nazi occupation of Czechoslovakia in 1939, and Albright lived in Belgrade, London and Prague before her family settled in Colorado. She earned a political science degree from Wellesley College in 1959, and was later awarded a master's (1968) and doctorate (1976) in public law and government from Columbia University. In 1978 she joined the staff of the National Security Council (under President Jimmy Carter) and began establishing herself as an expert in foreign affairs. President Bill Clinton named her the U.S. ambassador to the United Nations in 1993 and then, in late 1996, named her Secretary of State. She was confirmed in 1997, becoming the first woman ever to hold that post, and served throughout Clinton's second term. Her books include the memoir Madam Secretary (2003), The Mighty and the Almighty: Reflections on America, God, and World Affairs (2006), and Memo to the President Elect (2008).The color lithograph photo has been autographed on the front by Madeline Albright..............BOTH PHOTO AND AUTOGRAPH ARE IN VERY GOOD CONDITION. 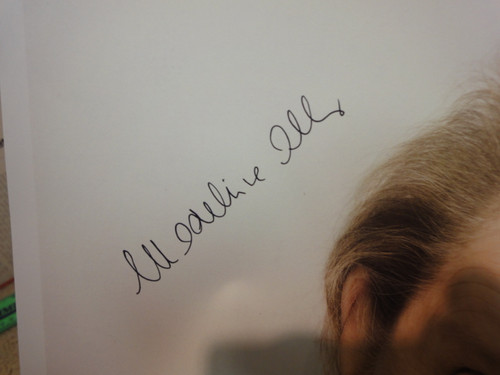