This item is an 11" X 15", color lithograph photo of actress Lola Albright. The color lithograph photo was a special supplement to The New York Sunday News Newspaper on April 24, 1949.Lola Albright's meat-and-potatoes job as switchboard operator of an Ohio radio station led to on-the-air work in minor roles. She then worked as a model before travelling to Hollywood in 1948. Impressed by Lola's hands-on-hips self-assuredness, producer Stanley Kramer cast her opposite Kirk Douglas in 1949's Champion. The film should have secured Lola's stardom, but didn't; for nearly a year after its release she couldn't get an acting job, and for a long period she subsisted on peanut-butter sandwiches. After marrying her Good Humor Man (1950) co-star Jack Carson, Lola found that her husband preferred her at home rather than in the studio. She acceded to his wishes, taking film and TV work only sporadically; still, by 1958 the marriage dissolved due to the very career conflicts that both Lola and Jack had tried to avoid. From 1958 through 1961, Lola played sultry nightclub songstress Edie Hart on the TV private eye series Peter Gunn. Lola's post-Gunn film roles have alternated between fascinating (especially her over-the-hill stripper in Cold Wind in August [1964]) and merely rent-paying (David Niven's antiseptic spouse in The Impossible Years [1968]). In 1966, Lola Albright briefly replaced a seriously ill Dorothy Malone in the role of Constance McKenzie on the prime time TV serial Peyton Place. The color lithograph photo has been autographed on the front by Lola Albright with a fountain pen in blue..................BOTH PHOTO AND AUTOGRAPH ARE IN VERY GOOD CONDITION............ 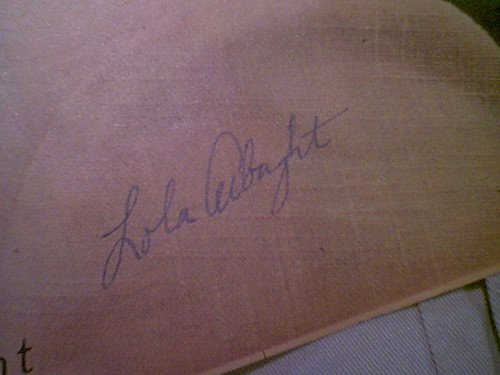