This item is an 8" X 10",black and white lithograph photo of Kirk Alyn in a scene from the 1950's "Superman" Movie Series. The lithograph photo has been mounted on an 8" X 10" piece of photography paper.Fresh out of Columbia University, handsome Kirk Alyn auditioned for a Broadway show as a gag , and much to his amazement, landed the role. He went on to appear as a chorus boy in such major musicals of the 1930s as Girl Crazy, Of Thee I Sing, and Hellzapoppin, and took small acting jobs in the Vitaphone two-reelers produced at Warner Bros.' Brooklyn studios. Moving to Hollywood in 1942, he was briefly seen in Columbia's My Sister Eileen (1942) and You Were Never Lovelier (1943), and played leads at PRC and Monogram. From 1946 to 1952, Alyn starred in six Columbia and Republic serials, never more memorably than as the Man of Steel in The Adventures of Superman (1948) and Atom Man Vs. Superman. Though it has been argued that he was more effective as Clark Kent than as Superman, Alyn still enjoys a loyal fan following for his two Superman appearances, reflecting this fact in the title of his 1974 autobiography A Job for Superman. From 1943 to 1949, Alyn was married to MGM contract vocalist Virginia O'Brien. Until his retirement in the 1960s, Kirk Alyn continued making TV appearances and also toured the straw-hat theater circuit with such Hollywood favorites as June Havoc and Veronica Lake. The photo has been autographed on the front by Kirk Alyn with a fountain pen in blue..............BOTH PHOTO AND AUTOGRAPH ARE IN VERY GOOD CONDITION.............. 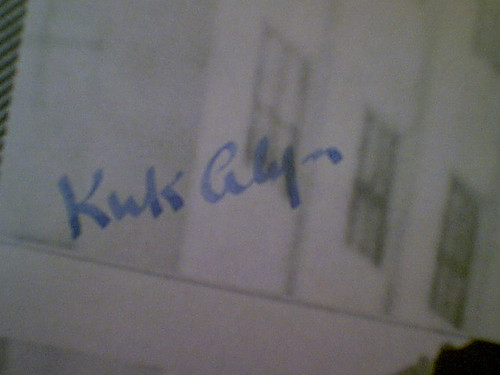