This is an authentically autographed Playbill by Joan Allen... Playbill-Aug 1989-The Heidi Chronicles-Photo cover is signed by Joan Allen, condition of the magazine and autograph is VERY GOOD. Joan Allen (born August 20, 1956) is an American actress. She worked in theatre, television and film during her early career, and achieved recognition for her Broadway debut in Burn This, winning a Tony Award for Best Performance by a Leading Actress in a Play in 1989. She has received three Academy Award nominations; she was nominated for Best Supporting Actress for Nixon (1995) and The Crucible (1996), and for Best Actress for The Contender (2000). Her other films include Face/Off (1997), Pleasantville (1998), The Notebook, The Bourne Supremacy (2004) and The Bourne Ultimatum (2007). 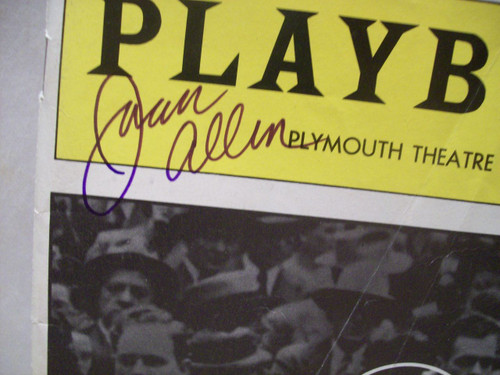