THIS IS AN AUTHENTICALLY AUTOGRAPHED PHOTO BY JACK ALBERTSON AND ABE VIGODA... THIS IS A 7 INCH BY 9 INCH BLACK AND WHITE PHOTO SIGNED BY JACK ALBERTSON AND ABE VIGODA FROM THE COMEDY COMPANY. HAS AN ATTACHED ORIGINAL DATED BYLINE ON CBS TV NETWORK STATIONARY. CONDITION OF THE PHOTO AND AUTOGRAPH IS EXCELLENT. Jack Albertson (June 16, 1907  November 25, 1981) was an American award-winning character actor dating to vaudeville. A comedian, dancer, singer, and musician, Albertson is perhaps best known for his role as Grandpa Joe in the 1971 version of Willy Wonka and the Chocolate Factory. For contributions to the television industry, Jack Albertson was honored with a star on the Hollywood Walk of Fame at 6253 Hollywood Boulevard.[1]. The actor often stated that he and fellow character actor, Arthur O'Connell, were often confused for each other. Abraham Charles Vigodah (born February 24, 1921), best known as Abe Vigoda, is an American movie and television actor. 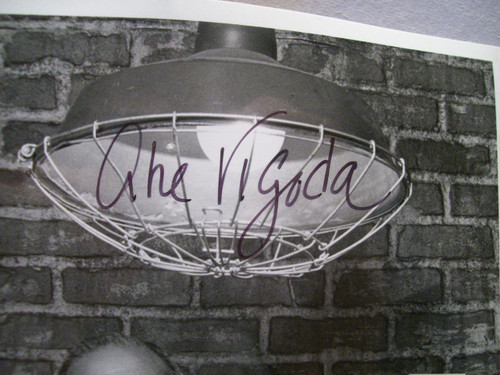