"The Ring"-January 1971-8" X 11"-65 pages-Magazine. This vintage boxing magazine-which originally sold for sixty cents-features a color cover photo of Muhammad Ali plus a  four page article with photos. Muhammad Ali (born Cassius Marcellus Clay Jr.;January 17, 1942 – June 3, 2016) was an American professional boxer, activist, entertainer, poet and philanthropist. Nicknamed The Greatest, he is widely regarded as one of the most significant and celebrated sports figures of the 20th century, and is frequently ranked as the greatest heavyweight boxer of all time. In 1999, he was named Sportsman of the Century by Sports Illustrated and the Sports Personality of the Century by the BBC. The magazine has been autographed on the front cover by Muhammad Ali....................BOTH MAGAZINE AND AUTOGRAPH ARE IN EXCELLENT CONDITION. 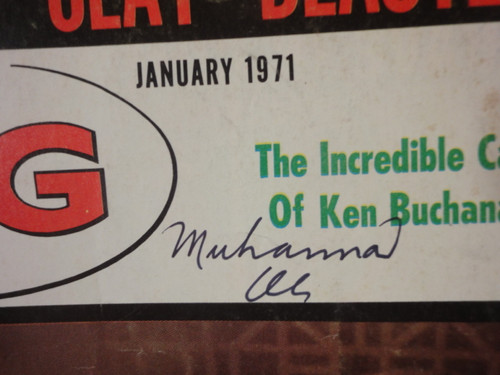