Playbill For The Billy Rose Theatre-"Who's Afraid Of Virginia Wolf?"-Vol 1-April 1964-6" X 9"-56 pages-Theatre Program-Signed By Edward Albee. Edward Franklin Albee III (March 12, 1928  September 16, 2016) was an American playwright known for works such as The Zoo Story (1958), The Sandbox (1959), Who's Afraid of Virginia Woolf? (1962), and A Delicate Balance (1966). Three of his plays won the Pulitzer Prize for Drama, and two of his other works won the Tony Award for Best Play. His works are often considered as frank examinations of the modern condition. His early works reflect a mastery and Americanization of the Theatre of the Absurd that found its peak in works by European playwrights such as Samuel Beckett, Eugène Ionesco, and Jean Genet. The Playbill has been autographed on the front cover by Edward Albee with a fountain pen in black...............BOTH PLAYBILL AND AUTOGRAPH ARE IN VERY GOOD CONDITION. 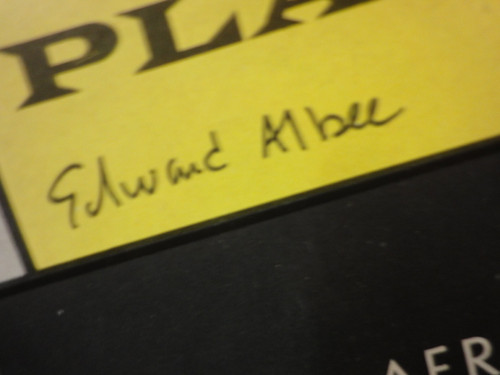