THIS IS AN AUTHENTICALLY AUTOGRAPHED PLAYBILL BY EDDIE ALBERT... PLAYBILL-MAJESTIC THEATRE-THE MUSIC MAN-1960-PHOTO COVER IS SIGNED BY EDDIE ALBERT-CONDITION OF THE PLAYBILL AND AUTOGRAPH IS VERY GOOD. Edward Albert Heimberger (April 22, 1906  May 26, 2005), better known as Eddie Albert, was an American actor, gardener, humanitarian, activist and World War II veteran. In an acting career that spanned nearly seven decades, he was nominated for the Academy Award for Best Supporting Actor in 1954 for his performance in Roman Holiday and again in 1973 for The Heartbreak Kid. Among his other well-known roles are Bing Edwards in the Brother Rat films, Oliver Wendell Douglas in the popular 1960s television situation comedy Green Acres and Frank MacBride in the 1970s crime drama Switch. He also had a recurring role as Carlton Travis on Falcon Crest opposite Jane Wyman. 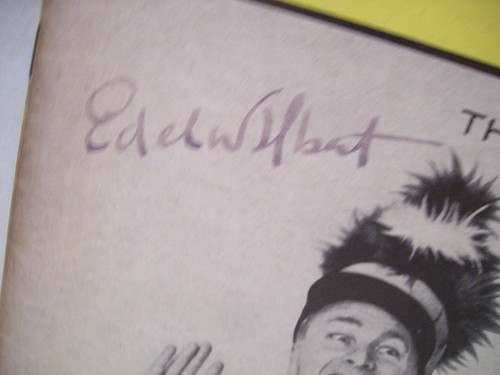