This item is an 8 1/2" X 11 1/2",color lithograph photo of Rocker Alice Cooper. Alice Cooper is a Rock musician known for his hard-rock teen anthems and theatrical live shows featuring shocking stunts and props. The son of protestant preacher, Cooper began playing in bands while in high school. After moving to Los Angeles in 1968, he released two albums on the label of experimental rock virtuoso Frank Zappa. In 1974, Cooper fired his band to embark on a solo career, scoring hits off several albums, including Welcome to My Nightmare (1975), Trash (1989), and A Fistful of Alice (1997). He also appeared in the films Sgt. Pepper's Lonely Hearts Club Band (1978), Wayne's World (1992) and Nightmare on Elm Street Part VI (1992). The color lithograph photo has been autographed on the front by Alice Cooper..............BOTH PHOTO AND AUTOGRAPH ARE IN VERY GOOD CONDITION. 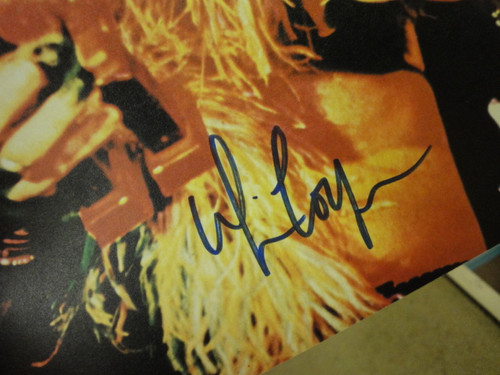