"Alice Cooper Trashes The World"-1989-10" X 14"-22 pages-concert program.Originally, there was a band called Alice Cooper led by a singer named Vincent Damon Furnier. Under his direction, Alice Cooper pioneered a grandly theatrical and violent brand of heavy metal that was designed to shock. Drawing equally from horror movies, vaudeville, heavy metal, and garage rock, the group created a stage show that featured electric chairs, guillotines, fake blood, and huge boa constrictors, all coordinated by the heavily made-up Furnier. By that time, Furnier had adopted the name for his androgynous on-stage personality. While the visuals were extremely important to the group's impact, the band's music was nearly as distinctive. Driven by raw, simple riffs and melodies that derived from '60s guitar pop as well as show tunes, it was rock & roll at its most basic and catchy, even when the band ventured into psychedelia and art rock. After the original group broke up and Furnier began a solo career as Alice Cooper, his actual music lost most of its theatrical flourishes, becoming straightforward heavy metal, yet his stage show retained all of the trademark props that made him the king of shock rock. The concert program has been autographed on the front cover by Alice Cooper......BOTH CONCERT PROGRAM AND AUTOGRAPH ARE IN VERY GOOD CONDITION. 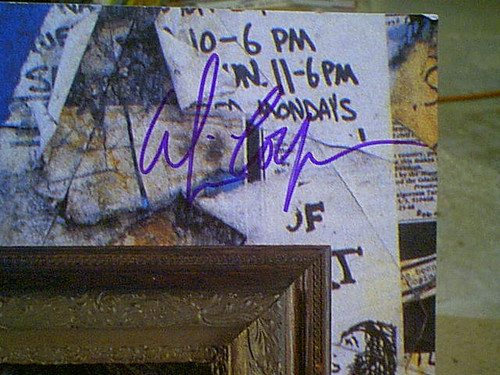