SPort Magazine-April 1967-92 pages. This vintage magazine-which originally sold for fifty cents-features a color cover photo of Lew Alcindor plus and article with photos.Kareem Abdul-Jabbar (born Ferdinand Lewis Alcindor Jr.; April 16, 1947) is an American former professional basketball player who played 20 seasons in the National Basketball Association (NBA) for the Milwaukee Bucks and the Los Angeles Lakers. During his career as a center, Abdul-Jabbar was a record six-time NBA Most Valuable Player (MVP), a record 19-time NBA All-Star, a 15-time All-NBA Team member, and an 11-time NBA All-Defensive Team member. He was a member of six NBA championship teams as a player and two more as an assistant coach, and was twice voted NBA Finals MVP. He was named to three NBA anniversary teams (35th, 50th, and 75th).Widely regarded as one of the greatest players of all time, often named a top 3 player in NBA history, he was called the greatest basketball player of all time by Pat Riley, Isiah Thomas, and Julius Erving. The magazine has been autographed on the front cover by Lew Alcindor...............BOTH MAGAZINE AND AUTOGRAPH ARE IN EXCELLENT CONDITION. 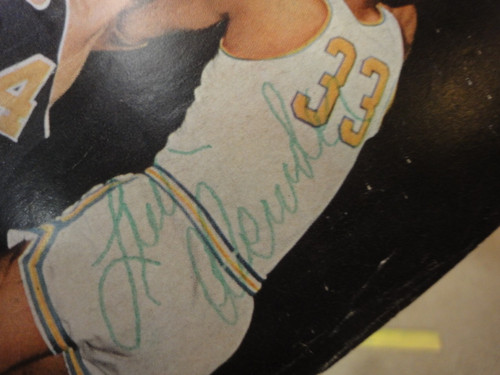