THIS IS AN AUTHENTICALLY AUTOGRAPHED LP BY MARTY ALLEN AND STEVE ROSSI.. ALLEN AND ROSSI TELL THE TRUTH ABOUT THE GREEN HORN NUT AND CA TOE(ROULETTE LP 507)LP HAS BB HOLE IN UPPER RIGHT CORNER. PHOTO COVER IS SIGNED BY MARTY ALLEN AND STEVE ROSSI. CONDITION OF THE VINYL,COVER, AND AUTOGRAPHS IS VERY GOOD. Allen & Rossi was a comedy team composed of Marty Allen and Steve Rossi, active from 1957 until 1969. They appeared on over 700 television shows including 44 appearances on the Ed Sullivan Show, including three of the four Ed Sullivan episodes on which The Beatles appeared. The team also appeared in a spy spoof film The Last of the Secret Agents (1966). On episode 851 of What's My Line, Allen & Rossi credited Nat "King" Cole for bringing them together. 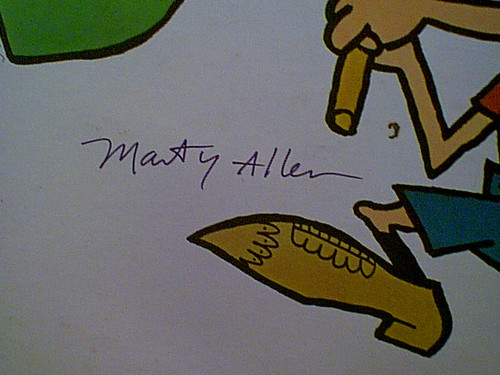