This item is an 8" X 10",black and white photo of actor Danny Aiello in a scene from the 1992 Movie-"Ruby". Also included are 5-8" X 10" photos of original scenes from the movie.Here's a fictionalized account of Jack Ruby's perspective of the events leading up to his assassination of Lee Harvey Oswald. Danny Aiello appears convincingly as the nightclub-owner Ruby who (according to this telling) points the finger at an FBI conspiracy as the force behind the Kennedy assassination. The film includes some actual footage from Ruby's Oswald shooting. One photo has been autographed on the front by Danny Aiello.............BOTH PHOTOS AND AUTOGRAPH ARE IN VERY GOOD CONDITION......... 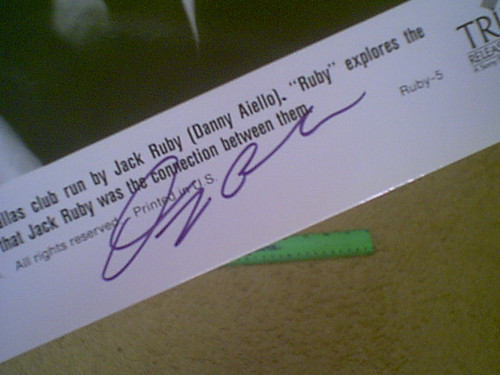