THIS IS AN AUTHENTICALLY AUTOGRAPHED PHOTO BY DANNY AIELLO... THIS IS A 8 INCH BY 10 INCH BLACK AND WHITE PHOTO SIGNED BY DANNY AIELLO. CONDITION OF THE PHOTO AND AUTOGRAPH IS VERY GOOD. Ruby is a film, released in the United States on March 27, 1992, about Jack Ruby, the Dallas, Texas nightclub owner who shot and killed Lee Harvey Oswald in the basement garage of a Dallas city police station in 1963. The film was directed by John Mackenzie and stars Danny Aiello (as Ruby), Sherilyn Fenn (as Sheryl Ann DuJean aka Candy Cane) and Arliss Howard. It is based on a play written by British screenwriter Stephen Davis. 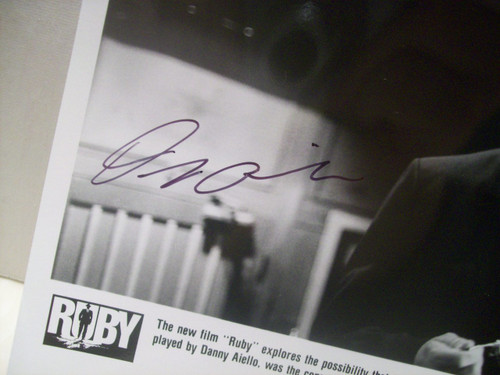