This item is an 8" X 10",black and white lithograph photo of actor John Agar in a scene from the 1956 Movie-"The Mole People". The lithograph photo has been mounted on an 8" X 10" piece of photography paper.The Mole People holds the dubious distinction of being the weakest of the Universal-International horror films. John Agar plays Dr. John Bentley, who leads a Middle Eastern expedition in search of a lost tribe of Sumerians. Bentley and his cohorts follow a tunnel deep, deep, deep below the surface of the earth, eventually coming across a tyrannical tribe of albino Sumerians, who use the semi-human Mole People as slaves. What follows is so dull and plodding that stars John Agar and Hugh Beaumont seem like Mel Gibson and Arnold Schwarzenegger in comparison. Some prints of The Mole People are minus the pre-credits "explanation" by 1950s celebrity egghead Dr. Frank Baxter. The lithograph photo has been autographed on the front by John Agar with a fountain pen in black...............BOTH PHOTO AND AUTOGRAPH ARE IN VERY GOOD CONDITION............... 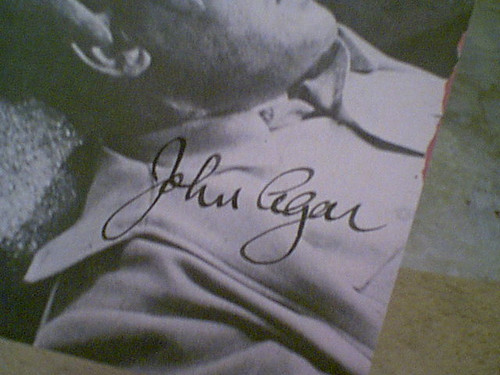