This item is a 10" X 13",color lithograph photo of musician Christina Aguilera.Christina María Aguilera (born December 18, 1980) is an American recording artist and actress. Aguilera first appeared on national television in 1990 as a contestant on the Star Search program, and went on to star in Disney Channel's television series The Mickey Mouse Club from 1993–1994. Aguilera signed to RCA Records after recording "Reflection", the theme song for the animated film Mulan (1998).In 1999, Aguilera came to prominence following her debut album Christina Aguilera, which was a commercial success spawning three number one singles on the Billboard Hot 100—"Genie in a Bottle", "What a Girl Wants", and "Come On Over Baby (All I Want Is You)." Her sophomore and her debut Latin-pop album, Mi Reflejo (2000), a Christmas third studio album, My Kind of Christmas (2000), and several collaborations followed which garnered Aguilera worldwide success, though she was displeased with her lack of input in her music and image. After parting from her management, Aguilera took creative control over her fourth studio album, Stripped (2002). The album's second single, "Beautiful," was a commercial success and helped the album's commercial performance amidst controversy over Aguilera's image.Aguilera followed up Stripped with the soul, jazz and blues inspired, Back to Basics (2006), released to positive critical acclaim.The lithograph photo has been autographed on the front by Christina Aguilera..................BOTH PHOTO AND AUTOGRAPH ARE IN VERY GOOD CONDITION. 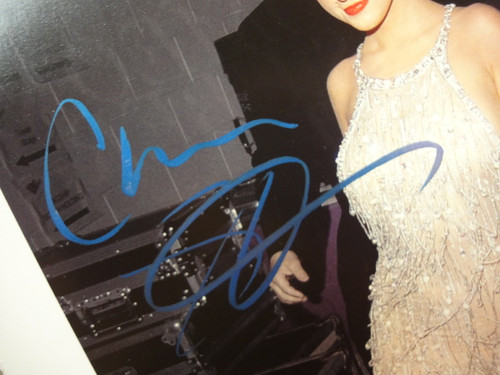