Konrad Adenauer-"World Indivisible"-1956-George Allen & Unwin-London-5" X 7"-121 pages-Hardcover Book-Signed By Author. Adenauer, Konrad-1876–1967, West German chancellor. A lawyer and a member of the Catholic Center party, he was lord mayor of Cologne and a member of the provincial diet of Rhine prov. from 1917 until 1933, when he was dismissed by the National Socialist (Nazi) regime. He was twice imprisoned (1933 and 1944) by the Nazis. Cofounder of the Christian Democratic Union (1945) and its president from 1946 to 1966, he was elected chancellor of the Federal Republic of Germany (West Germany) in 1949 and was reelected in 1953, 1957, and 1961. He also served (1951–55) as his own foreign minister, negotiating the West German peace treaty (1952) with the Western Allies and obtaining recognition of West Germany's full sovereignty through the Paris Pacts and through an agreement with the USSR in 1955. Adenauer's strong will and political acumen helped to give Der Alte [the old man], as he was known, great authority in West German public life. The political architect of the astounding West German recovery, he saw the solution of German problems in terms of European integration, and he helped secure West Germany's membership in the various organizations of what has become the European Union. In 1961 his party lost its absolute majority in the Bundestag, and he formed a coalition cabinet with the Free Democrats. In 1962 a cabinet crisis arose over the government's raid of the offices of the magazine Der Spiegel, which had attacked the Adenauer regime for military unpreparedness. After agreeing to the Free Democrats' demands that he exclude his defense minister, Franz Josef Strauss, who was implicated in the affair, from a new cabinet, Adenauer succeeded in re-forming the coalition. At the same time Adenauer announced (Dec., 1962) his retirement as part of the agreement with the Free Democrats. He resigned in Oct., 1963. His writings include World Indivisible (tr. 1955). The book has been autographed by Konrad Adenauer on the title page with a fountain pen in black...................BOTH BOOK AND AUTOGRAPH ARE IN EXCELLENT CONDITION. 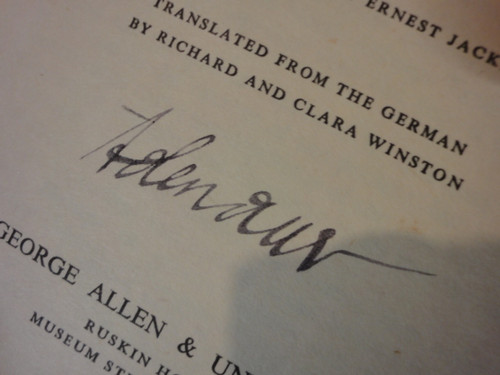