This item is an 8" X 10", black and white publicity photo for the television series-"The Addams Family". The Addams Family is an American macabre/black comedy sitcom based on the characters from Charles Addams' New Yorker cartoons. The 30-minute television series was created and developed by David Levy and Donald Saltzman and shot in black-and-white, airing for two seasons on ABC from September 18, 1964, to April 8, 1966, for a total of 64 episodes. The show is also notable for its opening theme, which was composed and sung by Vic Mizzy. The Addams Family is a close-knit extended family with decidedly macabre interests and supernatural abilities, though no explanation for their powers is explicitly given in the series. The wealthy, endlessly enthusiastic Gomez Addams (John Astin) is madly in love with his refined wife, Morticia (Carolyn Jones). Along with their daughter Wednesday (Lisa Loring), their son Pugsley (Ken Weatherwax), Uncle Fester (Jackie Coogan), and Grandmama (Blossom Rock), they reside at 0001 Cemetery Lane in an ornate, gloomy, Second Empire-style mansion, which is portrayed by the house at 21 Chester Place in Los Angeles The theme song contains the lyric, "Their house is a museum" which is borne out by the variety of objects in the interior scenes, some of which are collector's items and others which are only bizarre (such as the mounted swordfish head with a human leg protruding from the mouth or a stuffed two headed giant tortoise). Someone stole these props after the show was canceled.]The family is attended by their servants: towering butler Lurch (Ted Cassidy); and Thing (also Cassidy), a disembodied hand that appears from within wooden boxes and other places. Other relatives who made recurring appearances included Cousin Itt (Felix Silla), Morticia's older sister Ophelia (also portrayed by Jones), and Morticia's mother Grandma Frump (Margaret Hamilton). Many guest stars who were mainly famous during the era came in the show playing a cameo part as the script permitted (for example, truant officer, insurance salesman, etc.). The photo has been autographed on the front by John Astin Lisa Loring Felix Silla......BOTH PHOTO AND AUTOGRAPHS ARE IN EXCELLENT CONDITION. 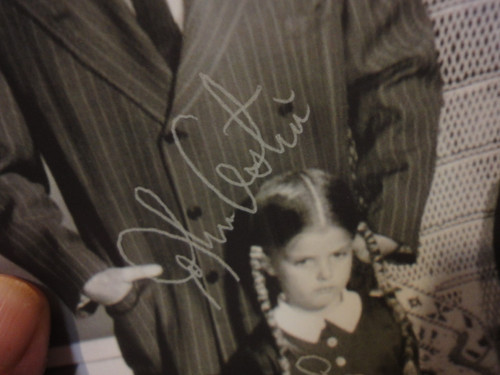