Hit Parader Magazine-June 1960-34 pages. This vintage Hit Parader Magazine-which originally sold for twenty five cents-features a cover photo of actor Nick Adams-plus a 4 pages article with photos. Nick Adams (born Nicholas Aloysius Adamshock, July 10, 1931 – February 7, 1968) was an American film and television actor and screenwriter. He was noted for his roles in several Hollywood films during the 1950s and 1960s along with his starring role in the ABC television series The Rebel (1959). Decades after Adams' death from a prescription drug overdose at the age of 36, his widely publicized friendships with James Dean and Elvis Presley would stir speculation about both his private life and the circumstances of his death. In an AllMovie synopsis for Adams' last film, reviewer Dan Pavlides wrote, "Plagued by personal excesses, he will be remembered just as much for what he could have done in cinema as what he left behind." The magazine has been autographed on the front cover by Nick Adams with a fountain pen in black........BOTH MAGAZINE AND AUTOGRAPH ARE IN EXCELLENT CONDITION. 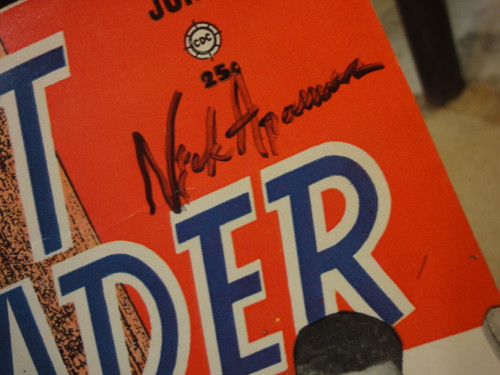