"Famous Monsters Of Filmland"-1970 Yearbook-81 pages. This vintage horror magazine originally sold for sixty cents.Famous Monsters of Filmland is a genre-specific film magazine started in 1958 by publisher James Warren and editor Forrest J Ackerman.Famous Monsters of Filmland directly inspired the creation of many other similar publications, including Castle of Frankenstein, Cinefantastique, Fangoria, The Monster Times, and Video Watchdog. In addition, hundreds, if not thousands, of FM-influenced horror, fantasy and science fiction movie-related fanzines have been produced, some of which have continued to publish for decades, such as Midnight Marquee and Little Shoppe of Horrors.The magazine has been autographed on the front cover by Forrest Ackerman with a fountain pen in black........BOTH MAGAZINE AND AUTOGRAPH ARE IN VERY GOOD CONDITION. 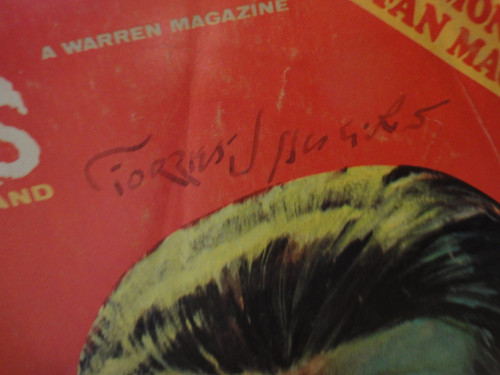