This item is a 10 1/2" X 14" cover from a Life Magazine dated February 21,1949. PLEASE NOTE-this is the cover only-there is no complete magazine. The Life Magazine cover features a photo of Dean Acheson.Acheson, Dean Gooderham, 18931971, U.S. secretary of state (194952), b. Middletown, Conn., grad. Yale, Harvard Law School. He was (191921) private secretary to Louis Brandeis, became a successful lawyer, and served (1933) as undersecretary of the treasury until he resigned in disagreement with President Franklin D. Roosevelt's fiscal policy. Having been assistant secretary of state (194145) and a key actor in the Bretton Woods Conference, then undersecretary of state (194547), he was appointed (Jan., 1949) secretary of state. Beginning in 1946 Acheson became convinced of the necessity of resisting and restraining the Soviet Union. Under his direction the policy of using foreign economic and military aid to contain Communist expansion, as enunciated in the Truman Doctrine, was developed, and the Marshall Plan was implemented. He also played an important role in establishing (1949) the North Atlantic Treaty Organization (NATO).The Life Magazine cover has been autographed on the front by Dean Acheson with a fountain pen in black.................BOTH COVER AND AUTOGRAPH ARE IN AVERAGE CONDITION..................... 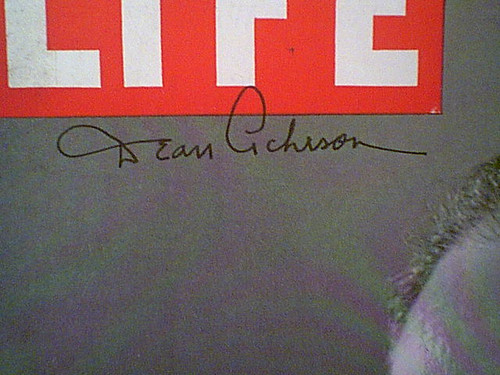