This item is a 12" X 12",color lithograph photo of Chinua Achebe.Achebe, Chinua, 1930, Nigerian writer, b. Albert Chinualumogu Achebe. A graduate of University College,Ibadan (1953), Achebe, an Igbo who writes in English, is one of Africa's most acclaimed authors and considered by some to be the father of modern African literature. Achebe taught briefly before becoming an executive at the Nigerian Broadcasting Corporation (196166). Pioneering in their portrayal of African life from an African perspective, his early novels are: the groundbreaking Things Fall Apart (1958), his masterpiece and probably the most widely read book by a black African writer; No Longer at Ease (1960); and Arrow of God (1964). Forming a thematic trilogy, these works poignantly describe the effects of European colonialism on Igbo society, Nigeria, and the newly independent African nations.His next novel, the political satire A Man of the People (1966), presciently foreshadows Nigeria's 1966 coups. Achebe served as a diplomat (196668) for Biafra during the Nigerian civil war and later wrote two volumes of poetry, Beware, Soul Brother (1971) and Christmas in Biafra (1973), and one of literary essays, Morning Yet on Creation Day (1975), about the war. He taught at the Univ. of Nigeria, Nsukka (197681), and was founding editor (1971) of the influential journal Okike. Achebe returned to the novel form with Anthills of the Savannah (1987), which explores the corruption and idealism of political life in postcolonial Africa. He has also written numerous short stories, children's books, and essays. A paraplegic as a result of a 1990 automobile accident, Achebe has lived in the United States and taught at Bard College since then. Home and Exile (2000), a collection of essays reflecting on his and his nation's coming of age, is the only book he has published during this period. In 2007 he was awarded the Man Booker International Prize.The color lithograph photo has been autographed on the front by Chinua Achebe..........BOTH PHOTO AND AUTOGRAPH ARE IN VERY GOOD CONDITION. 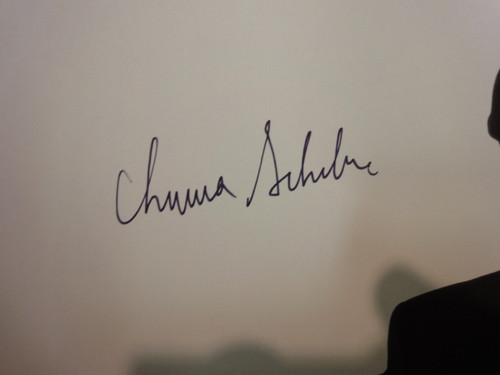