This item is a 10" X 15" page from the April 4, 1943 edition of The Sunday News. The item is a color lithograph photo of Abbott and Costello in a scene from one of their movies.William "Bud" Abbott and Lou Costello (born Louis Francis Cristillo), were an American comedy duo whose work in vaudeville and on stage, radio, film and television made them the most popular comedy team during the 1940s and 1950s. Their patter routine "Who's on First?" is considered one of the greatest comedy routines of all time, and set the framework for many of their best-known comedy bits.The photo has been autographed on the front by Bud Abbott with a fountain pen in brown and Lou Costello with a fountain pen in blue....CONDITION OF AUTOGRAPHS IS VERY GOOD. PHOTO IS BRITTLE FROM AGE AND HAS TEARS ON THE SIDES WHICH DES NOT AFFECT AUTOGRAPHS. 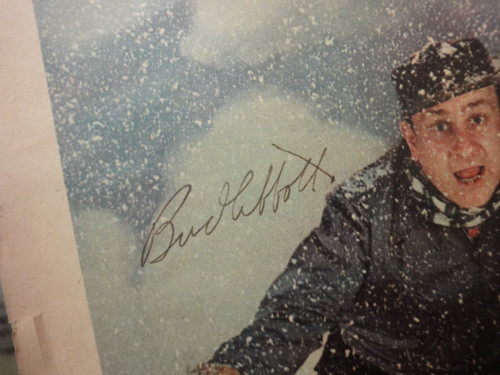