"Rin Tin Tin And Rusty"-Nov. 37 Feb-April 1961-7 1/2" X 10 1/2"-Dell Color Comic Book. This color comic book features Rin Tin Tin and Rusty (Lee Aaker) in an original color scene on the front coverChild actor Lee Aaker began making unbilled bit appearances in films in 1951. His roles increased in size and importance after his impressive showing as the contentious title character in the "Ransom of Red Chief" episode in O. Henry's Full House (1952). One of his better-known screen appearances was as yet another kidnap victim, the son of scientist Gene Barry, in The Atomic City (1952). To anyone born between 1945 and 1960, he will always be remembered as honorary cavalry corporal Rusty on TV's Rin Tin Tin, which ran from 1954 to 1958. After Rin Tin Tin ran its course, Aaker moved into the production end of the business, serving as an assistant to producer Herbert B. Leonard (who'd also been his Rin Tin Tin mentor) on the '60s series Route 66. Like many former child stars, Lee Aaker has occasionally been plagued by impostors claiming to be him; one enterprising phony successful posed as Aaker at several nostalgia conventions of the 1980s before one of the actor's sharper-eyed fans blew the whistle.The comic book has been autographed on the front by "Lee Aaker-Rusty" with a fountain pen in green............................BOTH COMIC BOOK AND AUTOGRAPH ARE IN USED CONDITION................ . 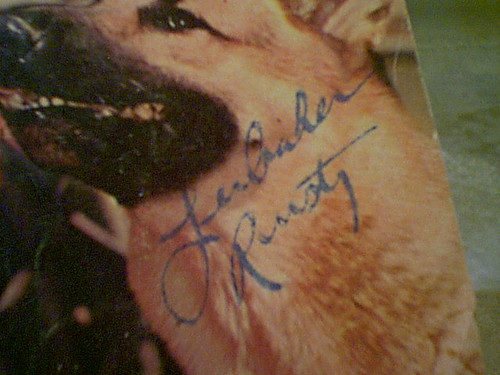