Jet Magazine-April 13,1972-66 pages. This vintage Jet Magazine-which originally sold for thirty five cents-features a cover color photo of Hank Aaron. The Jet magazine also features an article with photos on Hank Aaron.Aaron, Hank (Henry Louis Aaron), 1934, U.S. baseball player, b. Mobile, Ala. A durable outfielder noted for his powerful wrists, Aaron was among the first blacks to play a full career in the major leagues (195476). In 1974 Hammerin' Hank broke Babe Ruth's legendary lifetime mark of 714 home runs, eventually setting a record of 755 homers, which held until Barry Bonds hit his 756th in 2007. Elected to the National Baseball Hall of Fame in 1982, Aaron is baseball's career leader in runs batted in (2,297) and extra-base hits (1,477) and was an All Star a record 24 times. He also was the National League's most valuable player in 1957 and won three Gold Gloves. In 1976 he became one of the first black executives in the game, beginning a long tenure in the Atlanta Braves front office. He also is a successful Atlanta businessman.The magazine has been autographed on the front cover by Hank Aaron........BOTH MAGAZINE AND AUTOGRAPH ARE IN VERY GOOD CONDITION....... 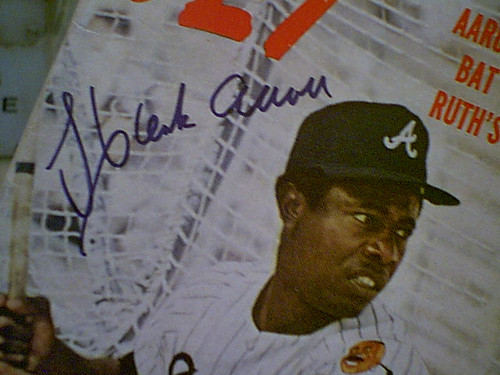