"Street And Smith's Official Yearbook-1974-Baseball" Magazine-137 pages.This vintage magazine originally sold for seventy five cents.Henry Louis "Hank" Aaron (born February 5, 1934), nicknamed "Hammer", "Hammerin' Hank", and "Bad Henry", is a former American baseball player whose Major League Baseball (MLB) career spanned the years 1954 through 1976. Aaron is widely considered one of the greatest baseball players of all time. In 1999, editors at The Sporting News ranked Hank Aaron fifth on their list of "Greatest Baseball Players".After playing with the Indianapolis Clowns of the Negro American League and in the minor leagues, Aaron started his major league career in 1954. (He is the last Negro league baseball player to have played in the major leagues.) He played 21 seasons with the Milwaukee and Atlanta Braves in the National League, and his last two years (197576) with the Milwaukee Brewers in the American League. His most notable achievement was setting the MLB record for most career home runs at 755.During his professional career, Aaron performed at a consistently high level for an extended period of time. He hit 24 or more home runs every year from 1955 through 1973, and is the only player to hit 30 or more home runs in a season at least fifteen times.He is one of only four players to have at least seventeen seasons with 150 or more hits.[3] Aaron made the All-Star team every year from 1955 until 1975[4] and won three Rawlings Gold Glove Awards. In 1957, he won the National League Most Valuable Player Award, while that same year, the Braves won the World Series, his one World Series victory during his career. Aaron's consistency helped him to establish a number of important hitting records during his 23-year career. Aaron holds the MLB records for the most career runs batted in (2,297) and the most career extra base hits (1,477). Hank Aaron is also in the top five for career hits with 3,771 (third) and runs with 2,174, which is tied for fourth with Babe Ruth. He also is in second place in at-bats (12,364), and in third place in games played (3,298).The magazine has been autographed on the front cover by Hank Aaron............BOTH MAGAZINE AND AUTOGRAPH ARE IN VERY GOOD CONDITION......................... 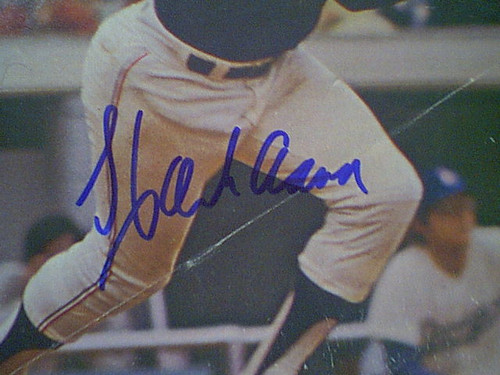