This item is an 8" X 12", color artwork photo of musician Natalie Merchant. Natalie Anne Merchant (born October 26, 1963) is an American alternative rock singer-songwriter. She joined the band 10,000 Maniacs in 1981 and was lead vocalist and primary lyricist for the group. She remained with the group for their first seven albums and left it to begin her solo career in 1993. She has since released seven studio albums as a solo artist.Merchant was lead singer and primary lyricist for 10,000 Maniacs, joining in its infancy in 1981 while she was a student at Jamestown Community College. The group recorded their first album Human Conflict Number Five, and recorded a corresponding music video at the Hotel Franklin and at Group W Westinghouse studios in Jamestown, New York, in 1982. Merchant sang lead vocals, and later played the piano as well on seven studio albums with 10,000 Maniacs. In 1993 she announced that she was leaving the group, citing a lack of creative control over the music she wrote with the band. Her last recording with the band, a cover of Bruce Springsteen's and Patti Smith's "Because the Night" at the 10,000 Maniacs MTV Unplugged performance, reached #11 on the Hot 100 chart on February 18, 1994; becoming the band's highest-charting song in the U.S. The color photo has been autographed by Natalie Merchant............................BOTH PHOTO AND AUTOGRAPH ARE IN EXCELLENT CONDITION. 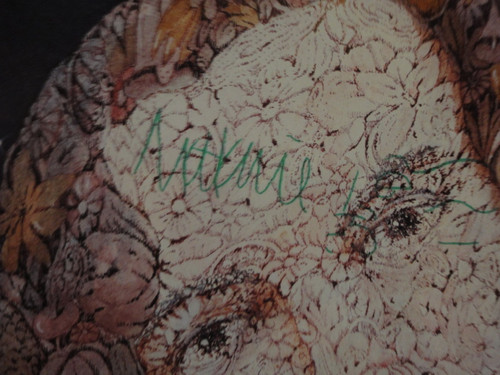